Longing and Belonging: A Conversation on Poetics 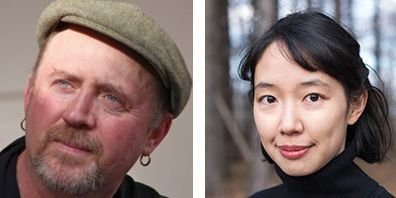 The YMCA Downtown Writers Center hosts this mini-seminar prior to an evening of readings featuring acclaimed poets, Kitano and Dougherty.  Each discusses how community -- and the lack of, or a yearning for community -- informs the practice of creating poems. Both writers have published important works that address this year’s Symposium theme of "Belonging."  This session is specifically targeted at serious writers and writing teachers; invited guests include advanced adult writing students from the Downtown Writers Center, creative writing MFA students from the University, and faculty members from both programs.

This collaboration was made possible through a Community Partnership Grant from Humanities New York.


CHRISTINE KITANO is the author of Sky Country (BOA Editions, Fall 2017) and Birds of Paradise (Lynx House Press, 2011). She received her BA from the University of California, her MFA from Syracuse University, and her PhD in English and Creative Writing from Texas Tech University. She was born and raised in Los Angeles, CA, and currently lives in Ithaca, NY, where she is an assistant professor of creative writing, poetry, and Asian American literature at Ithaca College.

Kitano’s Sky Country explores the various ways we negotiate how we belong in this world, how we make space in unwelcome spaces. The collection’s title is a translation of the Korean word for “heaven,” a kenning that literally means “sky country.” It was a word that potential immigrants often used to describe America. Once they arrived, of course, they often found America less than the ideal paradise they imagined. The poems throughout the collection explore how the idea of “home” becomes idealized through a nostalgic longing for a homeland that no longer (or never) exists, and what it means to survive between worlds.

SEAN THOMAS DOUGHERTY is the author of twelve books of poetry, including three from BOA Editions: Broken Hallelujahs (2007), Sasha Sings the Laundry on the Line (2010); and All You Ask For Is Longing: New & Selected Poems (2014). His awards include a Fulbright Lectureship in the Balkans and two Pennsylvania Council for the Arts Fellowships in Poetry. Dougherty received his MFA from Syracuse University and reads and conducts workshops around the country. His newest book is The Second O of Sorrow.

Writing about his own work, Dougherty says, “The difference between longing and belonging might describe what I've been trying to answer in my poems for decades.  Is belonging ever really possible?  Are we all outsiders, Auslanders, until someone opens a door, a border, a heart? Perhaps it is the poem itself that is an expression of belonging?  My new book, The Second O of Sorrow, deals extensively with a person’s struggle to still belong to a community despite racial or economic disenfranchisement, despite illness and pain, to hold on against the fragmentation of a community, or a family. To belong to a place, perhaps someplace simple as a bar, or a park where teenagers do not shoot each other, or a block where one can walk, despite fear, a place where the poem can speak:  to stand hand in hand is to fight with a collective voice.  A chorus, a chord, towards a collective healing.”