Making and Remaking a Literate Life: Being, Longing, Belonging 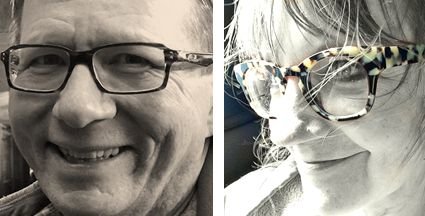 Paul Prior (University of Illinois)
Jody Shipka (University of Maryland)
This joint presentation by Prior and Shipka challenges static notions of being and belonging in accounts of literacies and disciplines. Instead, it offers a dynamic view of the embodied, affective, and historically situated processes of making and remaking literate lives.

Paul Prior on Becoming and Belonging With: Laminating Literate Activity and Disciplinarity
"Typical approaches to disciplines frame participation as a question of belonging to a disciplinary community, of tracing a developmental path that makes one a bona fide member. Seeing disciplinarity as ongoing dynamic flows, as a moving and morphing laminated assemblage rather than a bordered territory, I consider here an alternative framing, belonging with, a matter of aligning to flows rather than fitting into territories or being accepted as a member of the club. Drawing in part on a case study of a biologist (Nora) and her lifespan engagements with scientific practices, and contextualizing that case study in the centuries-long dispersion of biology into lifeworld artifacts, environments, and practices, I will sketch out the empirical and theoretical grounds for seeing disciplinarity and literate activity as laminated becoming and consider the ethical and political implications of this notion of belonging with instead of belonging to."

Jody Shipka on Be/longing: On the Distributed, Embodied, and Affective Dimensions of Composing Processes
"Historically speaking, composition—as a discipline and a course—has focused on human agents/agencies (writers) and the production of print-based (alphabetic) scholarly texts. I argue for an expanded, increasingly dynamic focus for composition: one that advocates for the inclusion of more beings (both human and nonhuman) and that recognizes various forms of longing and, in so doing, facilitates a greater capacity for belonging. More specifically, I argue for the importance of treating writing in relation  to the other rich and varied resources composers employ in their works and lives as a way of highlighting events, artifacts, affects, and bodies that have been underrepresented by scholars in the field, and also for the importance of frameworks that allow us to conceptualize research and composing processes as highly distributed and complexly layered arrangements of humans and nonhumans."